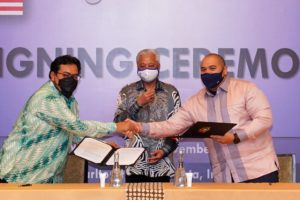 In a statement on Thursday (Nov 11),  Penjana Kapital highlighted that AC Ventures is one of the eight venture capital fund managers selected as part of Dana Penjana Nasional, a programme administered by Penjana Kapital.

“We are pleased with AC Ventures’ decision to partner up with Penjana Kapital and invest in the Malaysian start-up space.

“These funds are crucial to spurring our start-up ecosystem by encouraging innovation and equipping Malaysian innovators with the necessary resources to scale and succeed, particularly in Indonesia, the largest consumer market in Southeast Asia.

“By tapping the power of AC Ventures’ local knowledge and network, Malaysia’s start-ups stand a higher chance of go-to-market success in a US$1 trillion (about RM4.16 trillion) economy,” according to Tengku Zafrul.

With nearly 100 companies in its portfolio, AC Ventures has backed the likes of Carsome, Xendit, Stockbit, Eden Farm, Ula, and many other unicorns.

“Through AC Ventures’ investment, the SEA Frontier Fund will double down on its strategy of identifying and funding start-ups with the potential for cross-border regional expansion.

“The SEA Frontier Fund has also attracted commitments from strategic foreign investors, including a global conglomerate from South Korea.

“The SEA Frontier Fund, whose current fund size is RM200 million, aims to raise an additional RM100 million in the next three months,” it elaborated.

Separately, Penjana Kapital also shared that Dana Penjana Nasional had, thus far, raised a total commitment of RM995.4 million for its eight funds as of October 2021.

“Of the total, RM562.7 million came from foreign and private local investors. Penjana Kapital is also pleased to announce that Dana Penjana Nasional has approved 30 investments valued at RM267.2 million. Two of them have recently attained ‘unicorn’ status (start-ups valued at over US$1 billion),” it said.